After a good result at Gorrick 100 I felt in good shape for Exposure 12, held this year for the first time at the Wasing Estate in Berkshire.

Dad and I arrived friday afternoon, good job I have a van now as the amount of stuff I take seems to grow every race! I went for a practice lap friday afternoon and felt a little disappointed by the course, the laps felt too short and the some of the trails were very fresh, but I knew like most endurance races the course improves as it gets ridden in. The rest of the evening was spent catching up with fellow racers.

Race morning arrived and I felt pretty calm, I went through my usual race routine, and headed over to the start line. I was “seeded” second this year which meant I was officially called up to sign on, it also meant I could start at the front, which meant the 3rd row by the time i’d rescued my bike!
The start was fast, I didn’t want to lose touch with the front group, but I didn’t want to go into the red so early! I settled quickly and found a good rhythm, first lap was over very quickly, no need to stop I carried on, the first few laps carried on this way.

I felt ok but was concerned I may have been stretching my gel stops out too long as my lap times increased slightly, I quickly seemed to lose my head, I usually go through a rough patch but it happened much earlier than I was used to. I took on more food on my next stop, but still felt bad, I hate it when I can only “plod” round, but a plod was all I could manage! I wasn't used to this happening! I was still in 5th but couldn’t see this lasting! 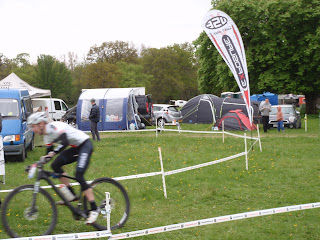 At around 6pm there was a torrential downpour which had been threatening all day, luckily on the previous lap I had put on a gillet which prevented me getting too cold, but on the next lap I added more layers, strangely the cold rain woke me up!

Soon enough it was dark, the course was quite muddy by then, but I still had plenty of grip in most parts but it was quicker to walk a few sections.

The last few laps went quickly and I finished 6th open male at 11.30pm, slightly disappointed that i’d not given it my all, but happy enough with the result, I guess it's taught me racing a 6hr race six days before a 12hour race is still too much for me.

Big thanks to Strada Wheels for the race jersey and spare wheels, Rob from Finely Tuned Ride for running the pits and keeping my bikes in great order and Dad for pushing me on through my poor patch

Next Stop Erlestoke 12 or 6?,single speed or geared? I'll decide the week before.