I’d never raced the Gorrick 100 at Swinley Forrest before, but as I arrived early sunday morning I was quite excited. After chatting with my racing buddies I lined up on the second row, the klaxon went and i got a flying start, easily within the top 10 entering the first bit of single track, I took it steady as it was slightly slippery, i left the single track and headed out along a muddy part of fire road, I had another rider to my left and decided to overtake through a puddle……..

The next thing I know i’m on the floor, feeling very dazed and disorientated. Two racing buddies stop to check on me, they show obvious concern and call for the ambulance, turns out the puddle was hiding a foot deep hole! The next few hours sees  me bundled of to hospital strapped to a board in a neck collar, I had two x-ray and a CT scan before they gave me the all clear 5-uncomfortable-hours later. I’m now left with a black eye and bad gravel rash on my face and knees, but still, could have been a lot worse.

My plan is still to race Erlestoke 12 in three weeks time, it was my first big win last year and i’d like to defend my title, but time will tell what I decide for definite. 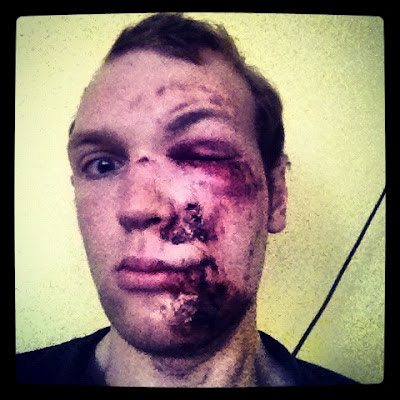