I’m obsessed with bikes, but i’m quite tight with money. As much as i’d love a Scott Scale or a Santa Cruz Highball the high frame costs are out of my reach

I’d seen a forum thread on MTBR which featured chinese carbon 29er frames, it was almost 100 pages long and mainly positive views, a few horror stories, but as with many things to do with cycling I take these with a pinch of salt. Still undecided on which frame to pick I emailed a few contacts who I knew had a chinese frame, they both came back saying that the Carbonal Gaea was a safe bet, it also had the best suited geometry to my needs, as I had noticed many had incredibly short top tube lengths compared to the seat tube, the head and seat tube angle were also similar to my Niner frame.

A few promptly replied to emails from the seller at Carbonal and I had ordered a 19” UD matt finish frame, with integrated headset and shipping, for the some of £320. 1 week later it arrived, packaged well, but with very little documentation. 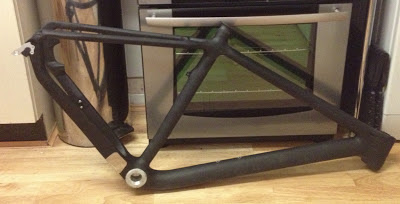 The build was simple enough, I’ve built a few bikes so i’m quite confident doing it myself. The internal gear cable routing caused a few headaches but my choice of Alligator I-link cables was to blame for that. Setting the rear mech was also tricky, the original mech hanger was not of the best quality, so it promptly snapped after a small amount of fettling, using the correct tool I hasten to add! replaced with a UK sourced alternative the gears work spot on, I used a 1 x 9 setup as I am used to one gear, so nine is a luxury. I imagine a 2 x 10, 3 x 10 or 1 x 11 would work just as well with the correct front mech.

I was not familiar with the tapered headset type, but the two bearings fit into a race, which is a structural part of the frame, I used an FSA 1.5” to 1 ⅛” adapter so i could run my existing 1 ⅛” RockShox Sid XX fork, no problems encountered. 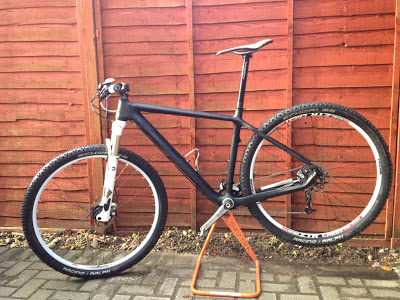 The remainder of the build was simple: the brake routing is neat and simple: i’m using a mixture of Hope and Superstat hubs on Notubes Stans Crest rims, I particularly wanted a hub with 10mm quick release skewer compatibility to improve rear end stiffness and as Hope’s are too heavy and DT Swiss too expensive I went for Superstar, I know sealing isn’t great but the bearings look easy to replace.

Overall the quality seems good,I have noticed due to the incredibly short headtube is that the brake levers and gear shifter clash with the top tube, this can be remedied by having a stem which points up instead of down and more spacer, but as I prefer a low front end I will gamble on protecting the top tube and having low torque on parts which clash, incase they need to move. Initially I have had trouble with the seatpost slipping, i’ve heard this can be a problem, i’m working on a few remedies, carbon paste and well placed zip ties have helped, but it still slipped 2mm in 4 hours so it requires more thought.

So in conclusion initial thoughts are good, with a tough but simple built the complete bike with pedals etc is 21.8lbs. Its first proper outing was at the first round of the Brass Monkeys 4hour race series, I had a silly crash which saw me chase back to 10th overall but the bike felt good, fast on the hills and handled well in the slippy conditions. I plan to get the matching rigid fork to save my suspension forks over the winter, and matching carbon wheels to increase stiffness still further and reduce weight. 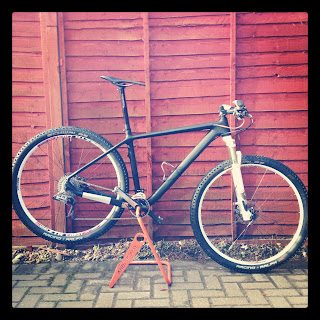 Update:
I decided to buy the matching rigid fork, initially put off buy the longer a-c height than my Niner rigid fork. First ride seems good, it is less refined than i'm used to, very stiff, with no "give" compared to the other forks i've tried, but for a winter fork for local riding I am happy so far. 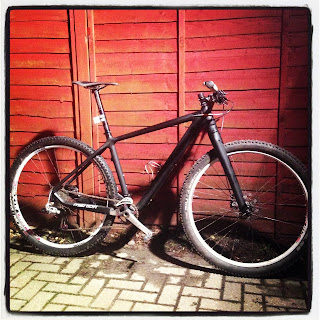