I have been impressed by my first chinese carbon 29er, it has been light and dependable, not the stiffest but it has survived several xc races and around 1000 training miles. So when I was looking for a race bike for this year I knew I could trust another chinese frame.

Frame: After further research I settled on the Hongfu FM056, it looked good and the geometry mirrored the  Scott Scale 29er so it should make a good race bike. Its light, but not the lightest at 1355grams, build quality is good, internal brake and gear cables are neat and tidy, and the headtube is a better length than my first frame. 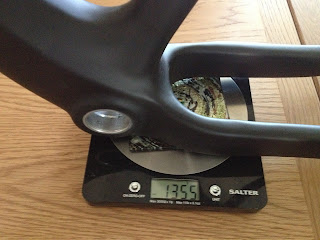 Fork: I've always liked the design of Cannondale Lefty forks, stiffness is superior to standard forks and its a similar weight, but all packed into one prong. I opted for the XLR carbon version with remote lockout with a Project 321 tapered steerer adapter. Initial opinions are good, it tracks well, the lock out is great and it looks Badass! 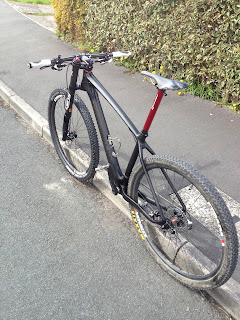 Wheels: These have been a while in the making, Strada pulled through and built me some awesome 29er wheels, DT Swiss 240 rear and Cannondale Lefty front hubs  built on Strada carbon 29er rims with CX ray spokes, they are light, around 1450grams, which helps them spin with minimal effort. The best thing about them is the lateral stiffness compared to my regular aluminium rims, which is a disadvantage of the big wheels, but with these, there is no lateral flex, awesome! A great addition to any xc bike. 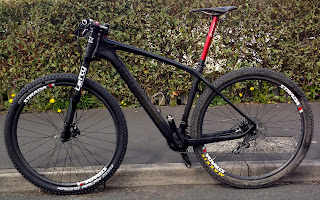 Drivetrain: I had originally wanted to go Sram xx-1 but parts were impossible to source and the huge cost of consumables (£300 for a rear cassette!) put me off. Since i've started using gears again Sram seem to have been reliable and easy to set up, X.0 throughtout, with 20 speeds, including a new Type 2 clutch rear mech, this gives me the option in the future to run a spiderless xx-1 style chainring for shorter races where 20 speed range isn't required.

Hope Race X2 brakes, well priced, light and relatively reliable, plus I have so many break pads from the other bikes it made sense.

Finishing Kit: Trusty Selle Italia SLR saddle. MT Zoom 700mm carbon bars, good quality, 0deg rise. Ergon GS-1 grips, round grips don't make sense to me, these are much comfier. Specialized S-works -12deg stem, in an effort to get the front end lower, looks great and lighter than Thomson. Trailbright Seatpost, Glynn contacted me asking whether i'd like to trial one after I broke my KCNC post, first impressions are good, its very light, the mechanism works well and the build quality is good. Matching Trailbright headset with ceramic bearings, nice quality and works well with the Lefty.

Thanks: Have to say thanks again to Strada for the wheels and fork and Finely Tuned Ride for putting the pro touches to the build, I know my limitation as a mechanic and my bikes always ride better after Rob's fettling. 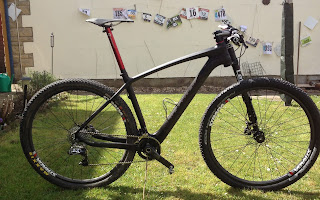