Gorrick 100 - A lesson in getting on with it

After last years disaster where my Gorrick 100 lasted 3 minutes I was keen to have a better race! Despite the race being 1 week before Exposure 12 I went for the 7 lap category, as it is part of the Endurance series, the Endurance series has been setup to recognise the riders who specialise in longer races which in the UK, which aren't noticed by British Cycling.....

After a long training week the previous week I cut my riding by and concentrated dialling-in my new race bike in the run up to the race, despite this come saturday I was still feeling tired.

After a very early start we arrived at Porrigepot Hill, a venue I know well having raced there plenty of times before. Lining up at the start the usual fast faces were in attendance, no matter the longer races are meant to suit me. The start was fast and I had very little in response, dropping away from the front group, along fireroad sections I knew well I had no real speed and couldn't make my way through the pack.

Over the next few laps I plugged on, making it up into 12th place, but not making any time up on the guys in front, but I wasn't losing time or places either, despite a few minor off's on the loose loamy trails and enjoyed the course, with the majority of the lap made up of singletrack it was physically demanding course, with little time to eat or drink. Gradually my legs switched on and I passed a few 7 lapper's, but I still didn't feel great but I made myself drink one full bottle & one Mulebar kick gel per lap.

The last 2 laps felt better, and by the final lap I was on the chase of the riders in front, making up a few places. In the end I finished 8th out of 77, happy with the result considering it wasn't my best day, but I glad I made the distance without having to dig too deep, but I know I could have done better. 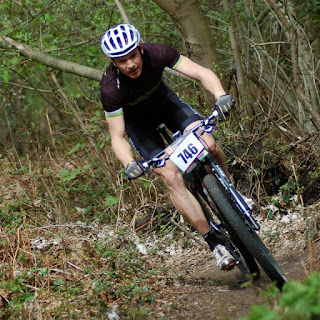 Next race is Exposure 12, Saturday 11th, so less than 1 weeks recovery, but i'm comfortable with that
Posted by Chris Noble at 13:17